Rita
My life has been a wonderful, sometimes terrible adventure, but then isn’t that a story that has been written over and over through millennia. Some of us live our lives and keep it tucked within our consciousness, but some of us feel a yearning to share the experience. I am one of the latter, evidently, which is why I am writing, writing, writing: offering herein my thoughts about where I have been and where I am going, about what has happened along the way, about those who have come before me and who are a part of who I have become. I feel such a strong kinship to my ancestors and to those who become a part of my journey. For all of those, I am eternally grateful. 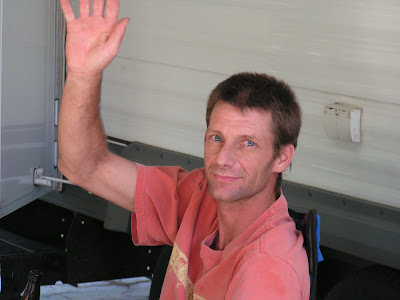 At long last, we have made it to Florida to see Darren. We were here last November, but the time between visits with those we love always seems so much longer. We checked into Williston Crossings RV resort mid-afternoon, saw Darren at home, and then he spent the evening at our place. While Chris was playing the keyboard, D and I set off on a little stroll around the resort, or so we thought. 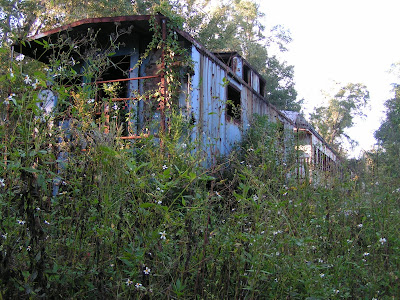 Almost immediately, we spied an old road veering off into the brushy woods; of course there was nothing for it but to see where it led. Of all the things we might have imagined would be out there in the brambles under huge trees, a railroad caboose was not one of them, yet there it was with vines climbing up and through the railings, around the sides and into the interior. 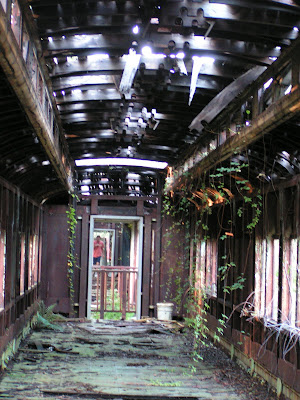 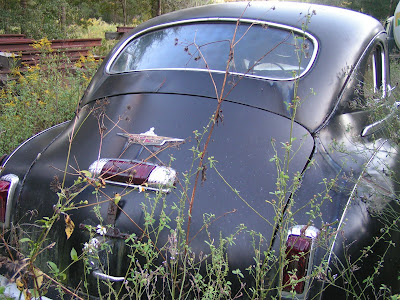 Closer inspection revealed four train cars behind it (or wouldn’t it be in front?). Eventually, as we made our way through jungle-like foliage, we came across interesting vehicles from the 1920s and 1930s, many more 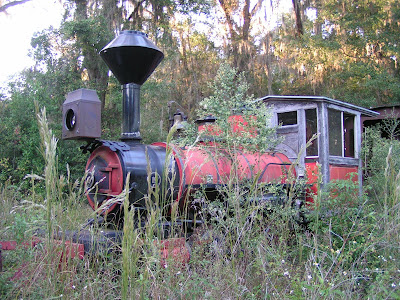 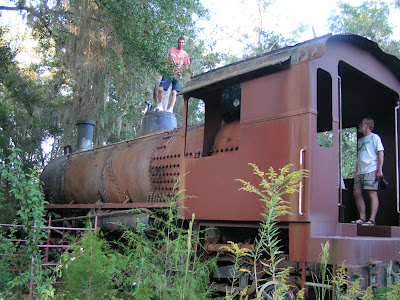 railroad cars, two steam engines, lots of track, mountains of pipe, lumber, cinder blocks, semi trailers filled with cargo, heavy equipment and much more. It became plain after a while that this multimillion dollar treasure trove had been left in place after cessation of construction of another phase of Willston Crossings, the RV park at which we are staying. Questioning of staff verified that this was the case: the resort’s master plan has been rendered unfulfilled for now. I can’t imagine it’s doing any of that equipment much good out there in the weather, but at least the mystery is solved. It all made for some great photo ops. 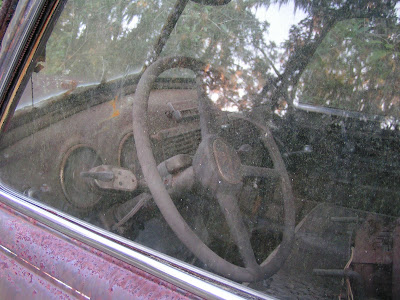 Our visit with Darren is too short, as are all visits with those we love, but we are grateful to have had the time with him. He keeps me laughing with his continual witticisms. We’ve spent time at his place where he’s doing major remodeling preparatory to the property being marketed. That area is extremely rural: ranch land with sandy soil vegetated by a variety of pines and much that I don’t recognize.

Darren had located a gopher tortoise den near the house, so we did a stakeout to allow me a glimpse of it. Unfortunately, despite our diligence, the tortoise didn’t show. He has seen it several times, so I had hoped to photograph it. Evidently, they are a protected species; Darren says developers sometimes obscure the dens so inspectors won’t know the tortoise is on the property. I was able to find quite a bit of interesting information about them online. Somewhere in our boondocking, we picked up a couple of hitchhiking ticks but jettisoned them at the earliest possible moment.

Darren said he leaves them on until they get big and fat, then has a friend whack them off with a nine iron. As I groaned in disgust at the alleged humor he said, “Yeah, I know, they oughtta use a sand wedge” This I begat?! 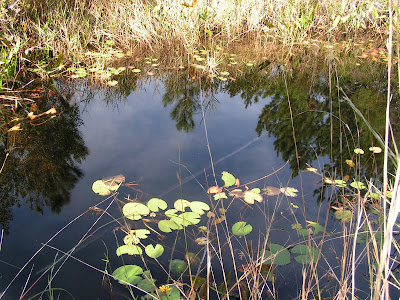 Ah well, we had good times fighting our way through various cypress swamps and wildlife management areas. Cypress can grow in waterlogged regions because their roots send up "knees", gnarly woody protuberances that allow the tree to breathe in the air rather than drown in the saturated ground. These areas 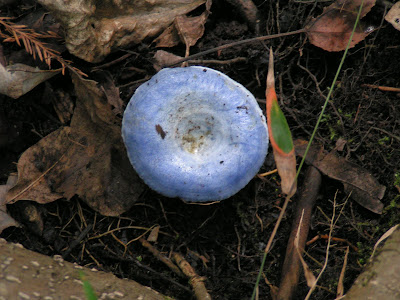 have a singular beauty of their own.

One morning, we added to the members of what I call our RV park pick-up band. A banjo player by the name of Bernie came over to jam with Chris. The two of them created some very nice music. Bernie and his wife Coraline (not Caroline, she emphasized) are here from their home in Buffalo visiting their son in Gainesville. He’s one of the first docs to graduate with a degree in palliative care and now is employed by Hospice.

As we did during last year’s visit, we drove to Cedar Keys, a quaint historic small town on the gulf at the Suwannee River’s outlet. We like it there very much; it’s quiet and unassuming. Of course we got lots of new trip birds while in the area. We met a nice couple from Massachusetts who had previously lived in Newbury, Mass where my 17th century ancestors, the Ilsleys immigrated, so we had fun talking to them. They were fellow birdwatchers and alerted us to bald eagles out at shell mound.

We had not been there and were very glad to have the tip about it. The shell mound is a fascinating place - an archaeological site - with beautiful intriguing trails leading through the moss-draped trees over and around the mound. Approximately 5,000 years old, the hill consists primarily of shells from an astronomical number of meals. It covers five acres and is 28 feet high - I could barely believe it even when I was there.

When I commented about what seemed like an awful mono-diet, Darren piped in with an imagined dialogue of that ancient age. It went something like this: “How about oysters for supper tonight? Again? We’ve had that for the last 3,000 years!”

We spent a goodly amount of time exploring the jungle of the mound, but were rained out when we emerged onto the beach hoping to spot the eagles. I opined that if we were home at Lynx Lake, we could see bald eagles any time.

And speaking of home: SNOW! while we are bopping around barefoot on the beach in shorts and tank tops. In fact, it remained so hot at night that we’ve run the air conditioner all night for the past two nights. The temp reached 89 yesterday, but felt much higher with the humidity.

Darren came to bid us farewell this morning. I’m at a loss for words when it comes to leaving behind all the people I love. We did skype with Sara while we were here so Darren could get a “live” look at his new niece crawling and trying to talk. She (Trinity Grace, not Sara) just got her third tooth in honor of the occasion.

We added onto our life bird list while here with a black and white warbler, blue-headed vireo and a red-shouldered hawk, in addition to a bunch of birds new for this trip.

Judging by the road kill we’re seeing, I’d say we’re into armadillo country; I’m guessing some of them are still alive and well out there in the trees, but the slower of the species signal southern driving. We drove out of an hour’s worth of heavy fog this morning into sunny skies with scattered clouds. Just heard on the radio about some place with two feet of snow - cripers!

Made me feel even better about sitting on the patio scarfing down a fresh pomegranate with juice running down my chin - the only proper way to indulge in such fruit. Reminded me of long summer days growing up in the then-rural area of Phoenix, where we kids would be out and gone from home through every bit of sunshine, no need to carry lunch: citrus, strawberries, pomegranates, grapes and dates abounded. I hope those farmers knew how much we appreciated them.

After a day of threading the Florida panhandle, we are arrived at our abode on Perdido Key. “Perdido” is “lost”, but obviously this key is found and getting founder. High rises along the beach are in the process of being joined by even more development. Quite a switch from Cedar Keys, but nevertheless attractive to me with lots of public beach access. We are just across the road from those white sands on a cloudy muggy afternoon. Our park is Playa del Rio, a small crowded friendly place inhabited primarily by motor homes and large fifth wheels. Our little Totee is satisfactorily perdido in here.

Florida’s panhandle is close to Texas’ in monotony but way more treed. We were surprised at one point when we got up high enough to see over the trees into the distance - how far I couldn’t say since there were no mountains to look at. Seems we were close to the state’s highest point: 346 feet above sea level. A person could drive that stretch without noticing that it is made up primarily of swamp. A casual look shows trees, trees and trees, but in the instances where you can see beneath them, it is most often standing water.

I just looked up the meaning of “key” lest I not know on what I am ensconced. Wow, I had no idea the word had so many meanings. It must be some kind of record. Anyway, this lost place is a reef or low island. We shall hold here for two nights, no longer. Rowdy and I are both riding with our noses to the vent; we smell home getting closer.